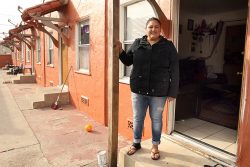 SANTA CRUZ – You might not think of Nayeli Lopez as a philanthropist, but she is.

She works as a housekeeper to make a living, supporting her son, 14, and her daughter, 12, and she appreciates Dr. Elisa Breton, who has been her family physician for nine years.

“She’s always caring about us,” Lopez said of the doctor who has treated her, her mother and her children. “If I see her downtown, she’s always smiling and giving me a hug.”

Breton, who plans to retire at the end of the year, has practiced medicine since 2005 at the Santa Cruz Women’s Health Center, a part of the nonprofit Santa Cruz Community Health Centers.

When Lopez heard that Santa Cruz Community Health Centers was raising money to match a $100,000 challenge grant, she wanted to help.

Two weeks ago, the announcement went out: The fundraising challenge launched in May by Frank Bien was a success, thanks to 75 donations that matched their $100,000 gift to create a “Pediatric Center of Excellence” to serve 4,000 local children, 95 percent living in poverty.

“We’re so thankful for the combined generosity of our community and the Bien family, which ensures we can serve thousands of beautiful kids as they grow,” said Leslie Conner, executive director of Santa Cruz Community health Centers.

Dr. Salem Magarian, who moved his practice in 2014 to the East Cliff Family Health Center, part of Santa Cruz Community Health Centers, explains it this way.

“I’m not just taking care of kids who are sick,” he said. “I’m helping families create the best environment for a young child to thrive.”

One of the children he cared for: Cecilia Rose Bien, daughter of Frank and Lorraine.

As her father detailed in an essay posted on Medium.com, Cecilia had incredible eyebrows and a soul-searching gaze and she loved being a big sister to brothers George and Stanley.

She was diagnosed with mucopolysaccharidosis, a rare condition caused by the shortage of a particular enzyme, and she died at 16.

Her father, CEO at Santa Cruz tech company Looker, embraced the vision for an all-encompassing system of care for low-income children “to ensure all kids have a healthy start to life and reach their full potential, building a healthier community for all of us.”

During the next two years, Santa Cruz Community Health Centers plans to launch “HealthySteps,”a program based in a pediatrician’s office to help families with young children from birth to age 3 understand and manage parenting challenges related to eating, sleeping and behavior.

Conner is working with Dientes, the nonprofit dental clinic, to build an 18,000-square-foot building at 1500 Capitola Road in Live Oak, slated to open in 2021 or thereabouts. The larger facility would have room to expand pediatric specialties and offer another new program, “Centering Pregnancy,”in which pregnant women with the same due date meet as a group to share concerns and discuss solutions.

Those who gave to the challenge campaign appreciate what Santa Cruz Community Health Centers has done and plans to do.

“I really like the fact that they provide pediatric care to all comers,” he said. “The facility here in Live Oak is busy all the time.”

Santa Cruz resident Carol Fuller, who spent many years on the board of Planned Parenthood, gave $5,000 to the challenge drive.

She also pledged $250,000 each to Santa Cruz Community Health Centers and Dientes toward new facilities at 1500 Capitola Road.

“Women’s health, that seems to me an essential service — that and Dientes are at the top of my significant local donations,” she said. “They’re very much symbiotic.”

Fuller recalled her working-class mother made sure her daughter went to the dentist so she could get a foothold into the middle class.

Nayeli Lopez, who doesn’t make enough money to afford health insurance, made her donation when she got a few extra dollars.

“It’s nothing compared to the benefit,” she said.

Lopez, who is working on on her GED, the high school equivalency diploma, to set an example for her children, volunteers at school and on the board of Nueva Vista Apartments.

“If I cannot help with money, I like to help with my hands,” she said.